The Prevalence of Obesity in a Rural Setting in Port Harcourt, Rivers State

The Prevalence of Obesity in a Rural Setting in Port Harcourt, Rivers State

Obesity is a state of excess adipose tissue mass. Although often viewed as equivalent to increased body weight, this need not be the case-lean but muscular individuals may be overweight by numerical standards without having adiposity. Body weights are distributed continuously in populations so that choice of a medically meaningful distinction between lean and obese is somewhat arbitrary. Obesity is therefore more effectively defined by assessing its linkage to morbidity or mortality. Overweight and obesity are the fifth leading risk of global death with at least 2.8 million adults deaths each year from complications of overweight and obesity.[2] The World Health Organization stated that 1.9 billion of the world population are overweight while 650 million are obese as at 2016.[2] In addition, 44% of diabetes mellitus burden, 23% of ischemic heart diseases, and 7%–41% of certain cancer burden are attributable to overweight and obesity.

Worldwide prevalence of 2 billion if overweight included, 700 million obese Nigeria adult prevalence is less than 10%.In USA a third obese, a third overweight. In USA African American are most obese ethnic group with 45% obese, followed by Mexican Americans. Most obese population are the Pacific Islanders. Not very common nationally 8% in adults (Akinkugbe O 1992).Rare, 1 – 3% in rural regions (Okesina AB 1999).Higher in urban regions, up to 40% obese or overweight in Ife (Ojofeitimi EO et al 2007).Commoner in females F:M of 3.0.Fairly common in S. E Nigeria due to cultural practices.

Health risks associated with obesity include coronary heart disease and other atherosclerotic cardiovascular diseases, stroke, type 2 diabetes mellitus, high blood pressure, kidney disease, sleep apnea, osteoarthritis, gallstones, fatty liver disease, stress incontinence, and other gynecological abnormalities (amenorrhea and menorrhagia) and various cancers.[3] Sabir et al. reported obesity and increasing age are the major risk factors fueling increased prevalence of type 2 diabetes mellitus among Nigerians.[4] Dankyau et al. reported high prevalence of overweight and obesity among tertiary hospital workers in Northern Nigeria.[5] High prevalence of hypertension was reported by Owolabi et al. among health-care workers in Nigeria despite their awareness of the disease.[6] It has also been reported that increased body mass index (BMI) predisposes to certain cancers.[7]Analysis of data from the 1980 National Heights and Weights Survey estimates that the prevalence of obesity in England stood at 6% of men and 9% of women aged 16 and over with 0.1% of men and 0.4% of women living with severe obesity.

Overweight and obesity were previously considered as the problem of the high-income countries as two-third of the USA population are obese; they are now on the increase in low- and middle-income countries, most especially in the urban settings.[8] In Nigeria,[9] the prevalence of obesity ranges from 8.1% to 22.2%. According to Hruby and Hu, nutritional transition, sedentary lifestyle, changing methods of transportation and increasing urbanization are fuelling non-communicable diseases.[10] Poor eating habits including increased consumption of energy-dense food, high level of sugar, and saturated fats combined with physical inactivity have led to increased prevalence of overweight and obesity in many parts of the world.[11]Moreover, there is a paucity of data on Obesity and other non-communicable diseases in this part of the country. As with other developing countries worldwide, Nigeria is experiencing an epidemiological transition in the health of its adult populace. This is mainly due to the adoption of western lifestyle as well as genetic and socio-economic factors and this has led to an increase in the prevalence of Obesity

This study aims to assess the prevalence of Obesity and its risk factors in a rural community in the Niger Delta region of Southern Nigeria.

This was a cross-sectional, descriptive, community-based study is to be carried out using a total of 107 adults; in Amadi-ama and Fimie communities in Port-Harcourt City Local Government Area of Rivers state, in Southern Nigeria. Approval for this study was obtained from the Ethics Committee of the Rivers State Ministry of Health, Port-Harcourt.

The participants were all apparently healthy adults aged between 20-80 years and were chosen via convenience sampling. The communities were initially sensitized about this study via town criers and church announcements and those that met the inclusion criteria were told to meet in church halls for screening. All the individuals who gave their consent were included in the study. Pregnant and lactating women as well as those who are obviously ill or wheel-chair bound were excluded from the study. Strict Covid-19 prevention protocols were adhered to.

A screening questionnaire, was given to participants and no monetary or any form of inducement was required of them.

The requirements for participation include being >18yearsof age with no previous history of hypertension or diabetes. 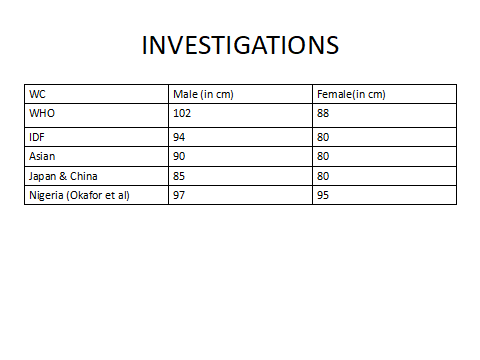 a) BMI (Body mass index is body weight/square of height, and the unit is kg/metre square.

The classes of BMI reported by WHO are ;

An average of 3 measurements were taken, and care was taken to select the cuff size according to the participant’s arm circumference.

Assessments were performed in a dedicated room, with optimum temperature and lightning while respecting privacy.

Blood measurements- Blood sugar was assessed using a glucometer and strip, after the participant’s thumb is pricked in order to get a drop of blood on the strip. While the lipid level was obtained using a 5ml syringe and needle to collect at least 5mls of venous blood into a heparin containing bottle and samples sent to the chemical pathology laboratory for analysis.

Some form of education on life style modification was also given to the participants accordingly.

Table 2: Prevalence of Obesity in the study population

Table 3: Prevalence of Metabolic Syndrome( Obesity as a component) by Respondents’ Socio-demographics

Table 5: Association of Socio-demographics and Metabolic Syndrome(Obesity as a component)

Table 7: Association between metabolic syndrome(BMI as a component) and Social behaviours /risk factors related to BMI of study population

Overweight and obesity are global public health problems that cut across all ages, sex, and races.[12] Overweight and obesity negatively affect most body systems (endocrine, gastrointestinal, nervous, and cardiovascular)[18] and predispose individuals to non-communicable diseases. Complications arising from overweight and obesity create more morbidities for the dwindling population of health-care workers to manage.[13]Health risks associated with obesity include coronary heart disease and other atherosclerotic cardiovascular diseases, stroke, type 2 diabetes mellitus, high blood pressure, kidney disease, sleep apnea, osteoarthritis, gallstones, fatty liver disease, stress incontinence, and other gynecological abnormalities (amenorrhea and menorrhagia) and various cancers.[3] Sabir et al. reported obesity and increasing age are the major risk factors fueling increased prevalence of type 2 diabetes mellitus among Nigerians.[4] Dankyau et al. reported high prevalence of overweight and obesity among tertiary hospital workers in Northern Nigeria.[5] High prevalence of hypertension was reported by Owolabi et al. among health-care workers in Nigeria despite their awareness of the disease.[6] It has also been reported that increased body mass index (BMI) predisposes to certain cancers.[7]Overall , 85.2% males have normal BMI while 14.8% males have a high BMI.66.2% females have a normal BMI while 33.8% have a high BMI. The prevalence of Obesity is more in females than males in this study. 44.9% had abdominal obesity, 29.0% had central obesity, In Nigeria, the prevalence of overweight individuals ranged from 20.3%-35.1%, while the prevalence of obesity ranged from 8.1%-22.2%.

.This high figure may be attributed to the epidemiological transition currently being experienced in this country as well as other developing countries in Africa and beyond. There is an increase in the adoption of Western lifestyle and urbanisation characterised by physical inactivity, inadequate consumption of the traditional African diet that is rich in fruits and vegetables and high consumption of Western styled energy-rich food. This leads to obesity, hyperglycemia, hypertension ( the most common components identified in this study) and subsequent developments of other components of metabolic syndrome.Disrupted sleep pattern and chronic stress have been implicated in the causation of overweight and obesity among health-care workers as they bring about subnormal hypothalamus–pituitary–adrenal axis.[20] The biological clock is affected by disturbances in the circadian rhythms. The hypothalamus houses the suprachiasmatic nucleus which is known to generate the circadian rhythm that regulates most physiological processes such as sleep, wakefulness, body temperature, and the production of some hormones such as melatonin (hormone involved in sleep), ghrelin (hunger hormone), leptin (fullness/satiety hormone), and cortisol (stress hormone). These hormones are known to maintain healthy weight. Misalignment in circadian rhythm has been reported among shift workers.[20],[21]

When the odds ratio was adjusted for confounders, it was found that age significantly predicted metabolic syndrome i.e. the odds of developing metabolic syndrome was 7.5% unlikely in persons between ages 21-30 years when compared to those above 60 years of age. This finding is similar to other studies done previously28,32. This is likely due to the fact that there is a higher propensity towards hypertension, dyslipidemia and obesity in the elderly21,22,23. Also the function of the islet cells tends to decline with age33. There is also a reduction in the level of physical activity with age34. These factors contribute to the increased prevalence of metabolic syndrome in the elderly. In this study, the prevalence of metabolic syndrome is higher in females (46.3%) compared to the males (25.9%). Although this difference is not statistically significant, this difference may be attributed to the greater percentage of women with high blood pressure and increased waist circumference seen in this study which is statistically significant. Abdominal obesity is a major component and predictor of future metabolic syndrome35,36. Women are said to have a higher HDL cholesterol in comparison to men partly due to the fact that they (women) respond to dietary ingestion of cholesterol and fats with a greater increase in HDL cholesterol than men37. The prevalence of overweight and obese individuals in Nigeria is of epidemic proportions. There is a need to pay closer attention to combating these health disorders.

The prevalence of overweight and obesity in a rural setting in Port Harcourt is high. These apparently healthy adult population might be at risk of noncommunicable diseases. Hence, there is a need for advocacy on therapeutic lifestyle modification among the population.The commonest components of metabolic syndrome identified study this are hypertension, hyperglycaemia and abdominal obesity. More so, obesity should be viewed as a disease rather than risk factor for other diseases.

The small sample size in this study is a major limitation factor. The findings, therefore should be confirmed with a much larger sample size.

There are no conflicts of interest.

29. Unamba N, Unamba B. Prevalence of Metabolic Syndrome and its Components in an Adult Nigerian Population Attending a Tertiary Hospital. The nigerian health journal vol 17, no 3 ( july-september2017)

31. Hajian-Tilaki KO, Heidari B. Prevalence of obesity, central obesity and the associated factors in urban population aged 20-70 years, in the north of Iran: a population-based study and regression approach. Obes Rev. 2007 Jan;8(1):3-10.

37. PM Clifton, PJ Nestel. Influence of gender, body mass index, and age on response of plasma lipids to dietary fat plus cholesterol. Arteriosclerosis and Thrombosis: A Journal of Vascular Biology. 1992;12: